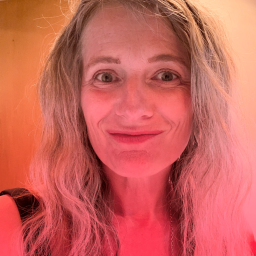 I'm Anthea from Aotearoa New Zealand; a mid-life introvert mum, freelance writer + educational designer, doTERRA essential oils wellness advocate and psychology student. I collect courage, confidence + empowerment ideas from colourful experience and the wisdom of others  ...cos you'd wanna slap your inner critic if she wasn't you. And because encouragement is a stupendous and often far too rare a thing     xAnthea

Last week I met Jacqueline Fahey at a party.

I had no clue at the time who she was. Nor she I. But I knew that I liked her immensely.

It was in her face at the first. Something about her eyes, the brow, the set of her mouth, her general demeanor. Her particular glint, and what I imagine is an almost permanently amused wry canniness she wears that you rarely meet, which is incredibly hard (and why would you bother) to resist.

“Did you choose your entire outfit based around your delicious jewellery?” I asked of her clavicle-covering vintage blue and beginning slightly to tarnish metal necklace, which I could have likely been persuaded to swap my two front teeth for, given the opportunity.

“Oh absolutely!” she replied without hesitation.

See? Jacqueline Fahey is my kind of woman.

The sailor striped media man standing beside me, however, was I think embarrassed for and by my obvious ignorance.

“Jacqueline,” he interjected, in what seemed very much like admonishment to me, “is an extremely distinguished painter and writer.”

The only way I could think to respond, as Sailor Stripes went on to fawn all over Jacqueline with great flattery and enthusiasm, and asked if he could possibly take her photograph. I held back on my desire to pluck my own iPhone out of my back jeans pocket to take a snap while he was about it. It would have been a good one though, I knew it too, with her large soft corn blue hat billowing ecstatically about her.

“I would be honoured,” Jacqueline said, all but confirming my suspicions that Sailor Stripes was indeed meant to be somebody in particular, as he looked like he should be vaguely familiar. Although the who part was lost on me, I’m afraid – a heathen, clearly. At least in such company.

It was that sort of party, though.

I mean the women I spoke to seemed ok, but many of the men – well, good grief, they were Horrid. And men can usually be such fun!

"How do you know such and such, so in so?” one inquired of me early on as I stood next to the trestle table come makeshift bar perched up against a wall of the verandah. Whirling around, turning his back on me blatantly with no further word uttered upon discovering that, actually, I didn’t.

Another… “We’ve only just met but I feel so connected with you” as he touched my wrists in weirdly feigned intimacy. Or maybe it’s an American or an Artist thing and I’ve cruelly misjudged him. He later pointed out to me his wife across the room – “the one dressed liked Scooby Doo”. He was correct on that score, mind. Absolutely, she was channelling the red haired, purple accoutered cartoon character of Daphne Blake. Impressive.

But no matter. Because this is really about Jacqueline Fahey. And me.

She left me feeling something. Something that I suspected was meaningful and important, only I wasn’t sure what.

I wondered if Google knew.

“I wanted to tell it like it was,” Jacqueline (does anyone ever call her “Jacqui” or “Jax” I wonder?) is recently reported in the NZ Herald’s weekend Canvas magazine of saying, of her vibrantly honest and detailed oil depictions, spanning decades of her life and past marital domesticity. A teller of truths.

Stroppy, strident, strong; qualities the same article by Kim Knight describes her as embodying. Because constant vigilance was required against conforming to the norm. Let discipline drop for a second, Jacqueline tells Kim, and other peoples’ needs would rush in.

My own domestic life of today – as a mother and a partner and a woman feeling her internal voice tugging at her more and more insistently – is perhaps both different and the same.

I am very fortunate, I have a great deal to be thankful for. Breathing, good health, my son, partner, regular orgasms, gin. Many demands yes, but still plenty of freedom and 'off duty' time to be myself.

I can’t paint for shit, granted. And I’m definitely not as publicly forthright as Jacqueline. But I’m beginning to wish or be inspired, when it comes to the latter, that I was.

There’s a growing part of me that’s tired of playing smaller, quieter, appropriate, suitable, trying to (albeit often unsuccessfully) downplay my emotions, being “good” if you like …of adhering to my own falsely acquired belief systems about myself, who I should be and who I am …and of brushing quickly over the awkward bits that no one really talks about much because of the tendency to cause discomfort, vulnerability. God Forbid.

Do you ever get that too?

But I tell you, I could have kissed Jacqueline Fahey square on the mouth at that ridiculous party last week. When just before I left, she looked at me directly and she said - "Your husband has chosen very wisely. You have a face that's very shrewd."

I could have kissed Jacqueline Fahey because, not only did I recognise her face and enjoy her without having to know who she was, but she saw and recognised mine too. Another rare and beautiful thing.